“Integral Relationships – A Manual For Men”, written by Martin Ucik (image to the right) and if you are familiar with Ken Wilbers Integral theories or Spiral Dynamics, you will find this book easy to understand.

The book is stuffed with all those models we men love in order to study theories about relationships.One model in particular that illuminates relationships is the Compatibility Matrix. The Matrix describes developmental stages in relationships using colored stages.

A short explanation on the Integral way of looking at relationships.

We know that evolution is a series of stages. We also know that human beings undergoes these stages and that there are similarities in evolutionary stages and personal development stages.

Life started as one celled amoebas in the primordial soup just as we started life as one celled creatures in the womb swimming in water. We transitioned from fish millions of years ago to amphibians and crawled ashore and left the water behind, just as when we are born. Later we became four legged animals and eventually we stood up as monkeys just as we are starting life crawling on four legs and later on learn to walk on our two legs.

In the Compatibility Matrix you can find out if you and your partner are on the same developmental stage and you can learn about the challenges and ccharacteristics of each level and spot the areas you don’t match.

When we reach a certain stage we normally also master the stages below. Look at the illustrations below.

Infrared stage is all about survival. Life and death. It is Me vs. You. Here you are either the victim or the executioner. Healthy relationships are impossible.  Less than 1% af US grown up population is in this group.

Magenta stage is all about instincs, but also the magical and superstitious – safety/danger – fight/flight. Me vs. You. Approximately 10% of US grown up population is in this group.

Red stage is called the egocentric stage. It is about power and control – good/bad – us vs. them. Red energy can be spontaneous, unrestrained, carefree, and alive. Red relationships has low moral  standards. They are short and infidelity is common. Approximately  20% of US grown up population is in this group.

Amber stage also called the mythic stage is all about right/wrong. Controlled by beliefs. Law and order. Rules and conventions. Behaviour and reward systems. (Mr. Nice Guy has an issue here). Amber relationships are very much like our grandparents marriages, gender specific and often life-long. Approximately  40% of US grown up population is in this group.

Orange stage also called the rational stage. Win/lose. Personal freedom and material wealth. Only facts counts. Orange men are often good providers, but do not want to develop. Orange women are very independent and they have a hard time finding a ‘good man’. Many Orange women have become so masculine that men are not interested in them any more. Men try to be better providers due to fierce competition. Approximately  25% of US grown up population is in this group.

Green stage makes men soft and women hard. Green women has become masculine and Green men has become feminine. Green relationships have a hard time. Green women will due to lack of sufficiently developed men, find a Red/Amber or Orange man because he has the power to sweep her off her feet – for a short time… Approximately  10% of US grown up population is in this group.

Teal stage is a change from 1. tier consciousness to 2. tier consciousness. From divided to whole. When women become Teal they open again to men and this time to men that is more awake as men. Only few people are Teal so it is hard to find partners at this stage, but in general people do not panik over details like that. Less than  3% of US grown up population is in this group.

Turquoise stage is transpersonal. People at this level live in accordance with their purpose. Love is essential and sexual energies flows through both body, heart and through the path they walk towards purpose. Conflicts are development. Transpersonal experiences are real. Ie. the ego structure is on standby and something bigger has taken over, starting with short periods, later on longer periods. Less than  1% of US grown up population is in this group.

The model above has 6 lines of development which corresponds to 6 areas in life and you can have different colors in different lines. In this model we have 3 tiers of consciousness and 12 colors. Martin only operates with 2 tiers and 8 colors – which makes the model easier to understand. Most of us is no where near the top four levels anyway. 1. tier is from infrared to green and this is where the majority of people are. Second tier is teal and turquoise which is extremely rare. My guess is people like Mother Theresa, Desmond Tuto and  Nelson Mandela is here. 3. tier from indigo to clear light could be Dalai Lama, Tulku Urgyen, Pema Chödrön, Ken Wilber… 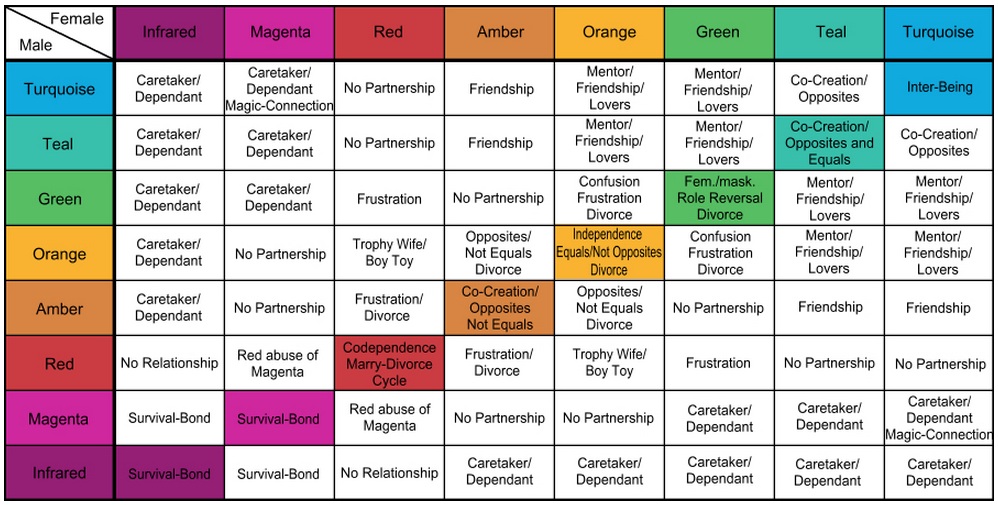 Click on the Compatibility Matrix and see who you match and what you can do to go to the next level.

If you want to find your color it would be wise to ask others. It seems like people in general has a tendency to rate themselves a little higher than other people would do. And other people are usually right! Avoid your inflationary thoughts by asking others. Even if you are thinking spiritual thoughts you are not spiritual. You are mental!

This only describes a small part of Martin’s book. He has a lot of models and the book is written for men in a language for men. That does not mean that women can’t read the book, but women who hasn’t integrated the masculine side of them selves would probably not read it, just as men who aren’t interested in self improvement wouldn’t read it. 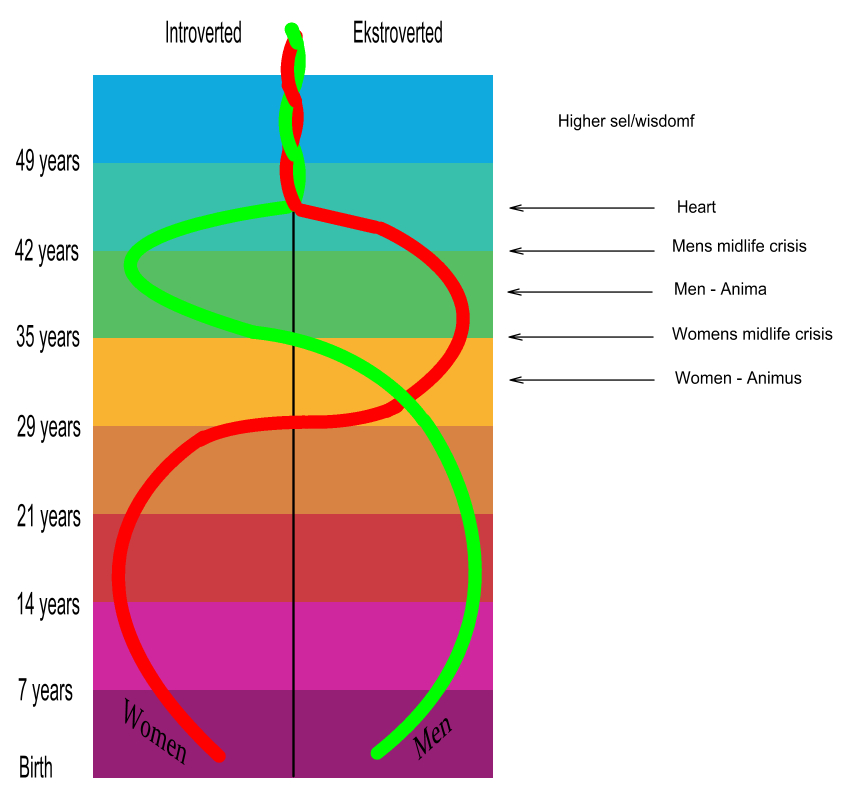 The first 30 years of our lives men are normally masculine and women feminine. Very handy as this creates ignition. Then comes midlife! Or as CG. Jung named it: Lebenswende. Or Life turn! This means that evolution wants us to learn how the opposite sex works – in order to become whole beings. For women this happens mostly in the mid thirties and for men it happens in the beginning of the fourties.

Women start to become masculine at Orange stage while men start to become feminine at the Green stage. The crisis starts when we discover that we are not what we thought we were. And this can be very frightening. But anyway… who we thought we were, was wrong anyway and now we have to find a new identity as whole beings instead of half men and half women and thus increase our capacity for love drastically.

We won’t meet a partner that fully understand us on all levels – until we are whole beings. A Red woman does not know what it is like to be a man. The Teal woman does! And from there on we walk towards deeper and deeper levels of love, accept, wisdom and understanding. One thing that becomes very clear is if you are only half a man you only experience half love and half sex. And you want love delivered from your partner.

When you are a whole being you start out by giving love instead of trading love.

So let’s get moving!