What most people do not know about Maslow is that right before he died he added another layer to the Apex of his pyramid which is called Maslow’s Hierarchy of Needs.

When comparing Maslow’s need ranking system to other religious and philosophical systems it seems that he was right. He DID miss something!

Most philosophical and spiritual teachings talk about leaving the Ego behind at some point and at the end of his life Maslow realized his model needed to reflect this.

Nearly all writings out there about Maslow’s Hierarchy of Needs do not reflect Abraham Maslow’s ‘last wish’.

Now, I want to add something too. Stage no. seven. As a coach for men it is obvious and necessary in my work to share your knowledge. Passing your wisdom on to others. We name this Contribution. Contribution is when you have enough of something to share with those who are in need. It starts at the Self-transcendence level but fully blossoms at the Unio Mystica stage.

Self-transcendence is when you get in touch with the core of your talents. The source so to speak. Beethoven was able to create a symphony despite he had no hearing what so ever. He was deaf, but still able to bring brilliant and beautiful music into the world to inspire others.

Einstein brought the theory of Relativity into the world.

Self-transcendence is the clear experience – my personal evidence that there is more to my life than me and my Ego. There is something way bigger than me. I am bigger than me! And the moment you realize this you watch your Ego FROM THE OUTSIDE probably for the first time in your life!

This is a life transforming event and you won’t be the same after this happens! Nearly all writings out there about Maslow’s Hierarchy of Needs do not reflect Abraham Maslow’s ‘last wish’. 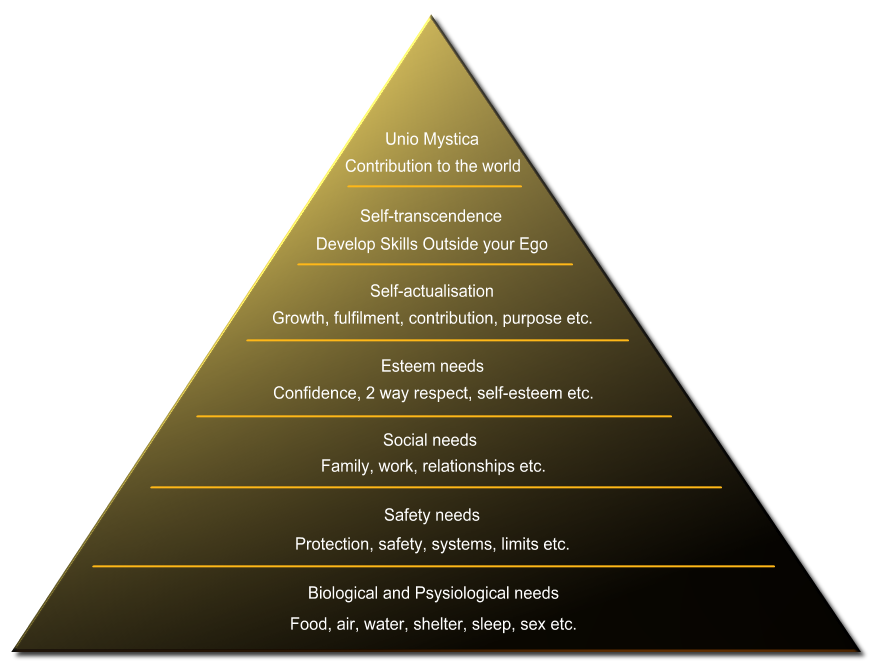 Leaving your Ego behind is probably the most life changing event we can process. Because it is not me – the Ego that experience it! Our Self Image becomes what it really is. An image! Which reveals who you REALLY are.

Contribution is simply giving your time or life to create a better world! Without the need of getting something in return.

Maslow was on to something! Don Beck, Christopher Cowan, Clare Graves and Ken Wilber would agree with him.

Next post: The Psychology of Being Introvert in Contrast to Being Extrovert

Previous post: Do you have the guts to stay intimate and present?