The Process of Decision

I often wondered why our politicians who should make the smartest possible decisions because they are our leaders, often make decisions that are almost unbelievable.

But I found some kind of comfort or at least explanation in The Integral Philosophy which resulted in this Process of the Decision model. I also noticed that the politicians who ‘talk’ to the lowest need for Security and Survival get a lot of votes. But there seems to be a tendency among liberal politicians to talk about money, success and winning (Orange) which also attracts a lot of voters.

The process of making a decision has to be seen from within the brain and there is logic and reason to how we make decisions. Decision making is very much related to Maslow’s Hierarchy of Needs.

Decision making in the first stages is fast and unconscious in order to sustain the survival of the fittest. At stage 6 – Green we start to become more aware of what we are doing when we are making decisions. 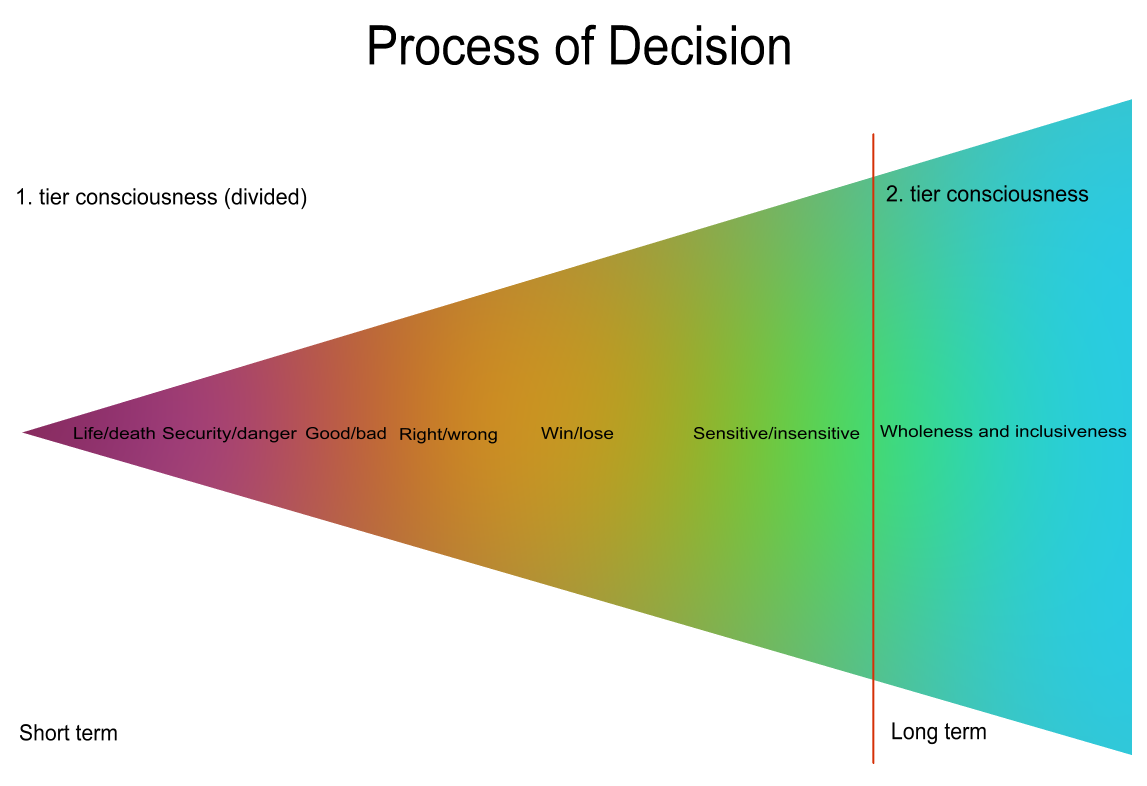 How does decision-making work in different stages (colours) of consciousness?

Stage 1 – Infrared: Decisions are made unconsciously from one and only one perspective. Life or death. Does my decision sustain my life or expedite my death.

Stage 2 – Magenta: Decisions are now unconsciously made from two perspectives. First Life or death. Next Safety/danger. Does my decision keep me safe or bring me in any kind of danger? The two first stages deal with physical needs (Maslow).

Stage 3 – Red: When my brain has calculated the best options for survival and the best options for safety, it goes on to take care of my psychological needs. Now I begin (a little more consciously) to decide what is good for me and what is bad for me. At this stage, there are no calculations on cause and effect. We are talking about what is good for me here and now. There is not much moral in the decisions. That often leaves room for others to take back what I took from them. At this stage I am not able to predict the consequences of my decisions. You don’t care about others.

Stage 4 – Amber: At this stage some kind of moral affects decision making. But it is MY moral – inherited from the tribe I live in.  There is only one right way and all the others are mistaken. Decisions are made from religious or superstitious beliefs and from the rules/law under which I live. And you really don’t care for people that aren’t part of your tribe. The future is not part of the tribe. Amber is about following the rules and getting rewarded. Do your job and you will get your pension. Follow the scripture and you will go to heaven. Do what you are told and you will get promoted. Most right-wing politicians are at Amber.

Stage 5 – Orange: At this stage, facts are considered. Not all facts. Mostly the facts that are in my best interest. Not even at this stage, people are able to make sustainable long term decisions. My success and reputation is the most important thing here. The survival of my Ego. Never mind the others. Orange can be ruthlessly in pursuing his goals and he doesn’t care if others have to pay or suffer.

Stage 7 – Teal: The first five stages are about ME and WE as opposed to YOU and THEM. Stage 6 is about us. All of us. We know that people are different and we are able to look at things from any angle. Not just MY angle. This makes the decision making process slower, but much more sustainable as a lot more factors have been taken into account.

Stage 8 – Turquoise: At this stage your decision making involves evolution. You found your purpose which has meaning for a greater number of people.

Next post: The Book Of ELI with Denzel Washington and Mila Kunis