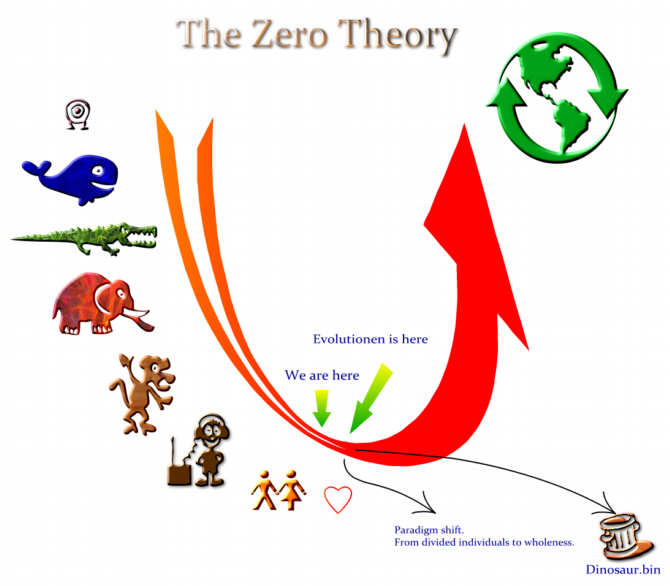 The Zero Theory explains the mess the world is experiencing right now. Until now evolution, illustrated by the red arrow, has allowed us to divide the world to survive. It has been necessary to be able to distinguish in a fraction of a second if things, animals or human beings were friends or enemies. This ‘strategy’ has produced two kinds of creatures. The Predator and The Prey. This goes for humans as well as animals.

But the world is in its midlife crisis now. And the purpose of any midlife crisis is to integrate opposites. The Ego and The Shadow. It is an opportunity to let the inner man and the inner woman look into each other’s eyes and recognize everything we are afraid of in our relationships. Intimacy and honesty just to mention a few. We are on the very verge of a paradigm change. The choice from evolution is simple: Survival of the human race or extinction.

If we continue to do what we have always done – dividing the world by creating enemies, evolution will make sure that we are unplugged! We have to wake up and realize that everything we have learned about survival is obsolete and that yesterday’s solutions applied to tomorrow’s problems are fatal! All our leadership tools from the past do no longer work. That’s why this is called ‘The Zero Theory’!

We have to learn to think and act from wholeness instead of dividing everything in good or bad.
This is a tremendous challenge. The Leaders of tomorrow must possess honesty and integrity to such a degree, that every single action he takes and every single word he speaks, can withstand anything.

We have spent millions of years developing The deepest part of our brain, the Reptilian brain. It is a very simple computer that will make sure that only individuals fit for survival will make it. It does so by accumulating information on what is good for me and what is bad for me.

We have spent hundreds of thousands of years developing the mammalian brain which among a lot of other things houses our emotions, which by the way are polarized or divided.

We have spent tens of thousands of years developing the new brain, Neo Cortex which among a lot of other things controls our language which also divides and categorizes everything so we can maintain our view of the world to navigate on earth.

We have spent seventy years trying to understand the opposite sex. Women became like men and wanted to work and have a career and men became soft and learned to change diapers! Which caused a lot of divorces! Until 1940 men and women needed each other to be men and women. This was an agreement we made to increase the survival rate.

The last ten years, men have tried to get back to being a man which in turn gives women a chance to become women again, without forgetting what we have learned. And what have we learned?

We have learned a very important lesson. We are on our way to be complete and whole beings. Men have integrated the inner femininity and women have integrated masculinity. And this is exactly why yesterday’s dividing strategies stop working!!!! We need a new strategy. Wholeness!
The balance between the inner opposites, in meta terms we call it masculinity and femininity, opens a new door for mankind. One of the hardest secrets to discover is that in this balanced life the Heart will open and grow. We all know somewhere in our minds that the heart shuts down when we live in extremes. Killing is extreme and if you allow killing you have to close your heart in order not to feel the pain the universe will inflict on you when you allow such things.

When our hearts no longer are divided, Wholeness becomes the way of evolution and when we become whole beings, this opens to an unknown source of creativity. The alternative is that we continue dividing ourselves and the world right into hell!!!

As a true Leader, you have to lead the way before the old leaders lead us astray!

Next post: Do you have the guts to stay intimate and present?